C-terminal Glutathione S-transferase (GST) tagged Recombinant from Schistosoma japonicum, which is widely used for the production of fusion proteins in the cytoplasm of Escherichia coli, was employed as a functional fusion cassette that affects dimer formation of a recombinant protein and confers indicator enzyme activity at the same time. For this purpose, GST was linked via a flexible spacer to the C-terminus of the thiol-protease inhibitor, cystatin, whose papain-binding properties were to be studied.

The fusion protein was secreted into the bacterial periplasm via the OmpA signal peptide to ensure the formation of the two disulfide bonds in cystatin. The formation of erroneous crosslinks in the oxidizing medium was prevented by replacing three of the four exposed cysteine ​​residues in GST. Using the tetracycline promoter for tightly controlled gene expression, the soluble fusion protein could be isolated from the periplasmic protein fraction. Purification to homogeneity was achieved in a single step by means of a glutathione agarose affinity column.

Alternatively, the protein was isolated by streptavidin affinity chromatography after the Strep-tag had been added to its C-terminus. The GST moiety of the fusion protein was enzymatically active and kinetic parameters were determined using glutathione and 1-chloro- 2,4-dinitrobenzene as substrates. In addition, strong papain binding activity was detected in an ELISA. The signal with the cystatin-GST fusion protein was much higher than with cystatin itself, demonstrating an avidity effect due to the formation of GST dimers.

The quaternary structure was further confirmed by chemical crosslinking, which resulted in a specific reaction product with twice the molecular size. Therefore, the engineered GST is suitable as a secretion-competent fusion partner of moderate size that can confer bivalence to a protein of interest and promote detection of binding interactions even in low-affinity cases.

Protein purification with affinity tags, such as glutathione S-transferase (GST), histidine (HIS) and other affinity tags, allows the purification of proteins with both known and unknown biochemical properties. Therefore, this methodology has become a widely used research tool to determine the biological function of uncharacterized proteins. GST is a 211 amino acid (26 kDa) protein whose DNA sequence is frequently integrated into expression vectors for recombinant protein production.

The result of expression from this vector is a GST-tagged fusion protein in which the functional GST protein (26 kDa) is fused to the N-terminus of the recombinant protein. Because GST folds rapidly into a stable and highly soluble protein upon translation, the inclusion of the GST tag often promotes greater expression and solubility of recombinant proteins than expression without the tag. Additionally, GST-tagged fusion proteins can be purified or detected based on the ability of GST (an enzyme) to bind to its substrate, glutathione (GSH).

Glutathione is a tripeptide (Glu-Cys-Gly) that is the specific substrate for glutathione S-transferase (GST). When reduced glutathione is immobilized via its sulfhydryl group on a solid support, such as cross-linked bead agarose, it can be used to capture pure GST or GST-tagged proteins through enzyme-substrate binding reaction. 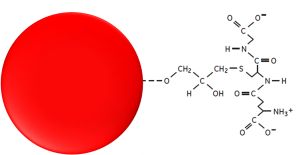 Binding is most efficient in near-neutral buffers (physiological conditions) such as Tris-buffered saline (TBS) pH 7.5. Because binding depends on the preservation of the essential structure and enzymatic function of GST, protein denaturants are not compatible.

At 26 kDa, GST is considerably larger than many other fusion protein affinity tags. For reasons that have not been fully characterized in the literature, the GST fusion tag structure is often degraded upon denaturation and reduction for protein gel electrophoresis (eg, SDS-PAGE). As a result, electrophoresed samples of GST fusion proteins often appear as a ladder of lower MW bands below the full-size fusion protein.